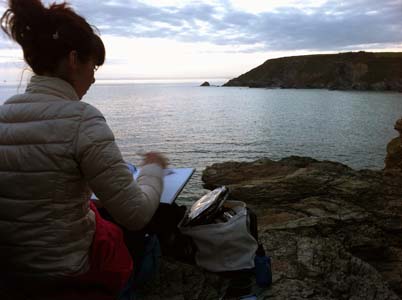 Led by my responses to landscape, light and weather and also by the process of painting itself, I make paintings that refer to both the permanent elemental nature of land and a more ephemeral sense of fluidity and change. In drawings made on the spot and in larger paintings in the studio, I try to capture the intangibility of the changes which rain, mist, sunlight, cloud, snow bring to the face of the land.

I also love to record my travels, whether in Britain and Europe or further afield such as trips to the Himalayas and Canada.

I am increasingly exploring in greater depth the relationship between what is being painted and how it comes about, how much is real place and how much painted space. Drawing and making notes outside in the landscape allows me to instil in my mind a feeling of a place with its sights and sounds. However, the separation involved in making the paintings back in the studio is equally important to allow me to approach the work freely, as a painting rather than as a detailed geographical record. In the first stages of a painting, I pour and drip very liquid paint, manipulating it by tilting and moving the support on the floor and easel. Gradually I refine this process, responding to the marks and to my own sense of the space that emerges. I also often use wax, collage and other media alongside the veils of thin acrylic and oil paint, to explore these different levels of looking and ways of experiencing a place and space.